One Born Every Minute is back! I know that there are a lot of mixed opinions about OBEM, but at its core I believe it’s a good show with good intentions. It’s just badly or awkwardly edited, and doesn’t get backed up with much education. I think especially for student and qualified midwives it can be frustrating because we don’t know the history of these women, so we say “why is she on her back in bed instead of mobilising” or “she didn’t need a section.” And there’s a general consensus that OBEM is a bit on the scaremongering side for pregnant women. I personally don’t like the opening sequence of screaming and shouting. 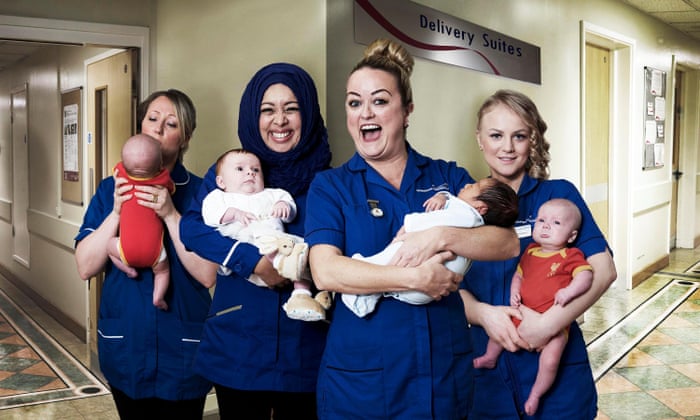 How and ever, I usually really enjoy the show and last night was no different! Stephen and Jodie were a really fun, entertaining pair. The friends with benefits plus the new girlfriend dynamic was really interesting, I love seeing non-traditional families on tv. I was really sad to hear (via this facebook post) that while Stephen was a great birth partner, he hasn’t seen his girl since Christmas. But it was lovely to see Jodie defending her family and being so mature further in the comments.

Maria and Derroll were in for the planned section of their rainbow baby. Their story was so sweet and lovely, and you could see from the way they looked at each other that they really and truly are besotted with each other. The way they told the story of meeting, and blending their families, and their miscarriage, it was just very open and honest. And again, being a blended family (with children from previous relationships) it was a bit non-traditional.

I started crying when Harley was born, because of the look on Jodie’s face. It was just that look of pure amazement, and happiness, and knowing she had done it, she had brought her beautiful girl into the world. I don’t think there’s a better moment in the world than the moment someone becomes a parent.

Now, since last night I’ve seen some complaining about the show. Not about the editing, or the fact they were both sections (which is fine with me, it’s not my birth and they aren’t my patients). It was about there being no birth for fifty minutes, and the amount of focus on the midwives. I was initially confused about it. I’m still kind of confused to be honest. Birth isn’t a quick process people! Labour can be hours and hours long. And the time slot is an hour, I’m not sure what else they could show once the babies are born. As for the stick about the midwives, I think the conversation was in keeping with the theme of the couples: finding love. I think it’s nice to get to know the midwives as well as the couples.

So, did you watch the new episode? What was your favourite moment? Do you have issues with One Born that I haven’t highlighted? Let me know in the comments! ❀

first day of Midwifery:September 12, 2017
The big day is here! My first day of the midwifery course.